Hey Everybody! Welcome to another review from Flickmuncher.com where we entertain food for thought. My name is Ben and I’m the Flickmuncher. We’ve got quite the line up these next few weeks and I’m excited to share the next several reviews with you as well as show off the new collaborative reviews that I’ll be doing for episodes of the 2017 Ducktales TV series with our new contributor Mimi the Flickmunchkin, which should be starting in March. However, until then, let’s take a look at the recent DC movie release, Aquaman.

So let’s get right into it. What’s the story? Arthur Curry (Jason Momoa) was a boy born cursed. The son of a Lighthouse Keeper (Temuera Morrison) and the runaway Queen of the underwater Kingdom of Atlantis (Nicole Kidman), he was blessed with amazing abilities beyond that of normal people. Yet he is constantly split between the surface world that he calls home, and the realm of the sea that calls him to lead it. Uninterested in becoming Atlantis’ king since the death of his mother, Arthur spends his time using his abilities to do good deeds where he can. All this changes however, when his younger half-brother Orm (Patrick Wilson) starts to gather the kingdoms of the seven seas to attack the surface world. With the help of his mother’s old friend Volka (Willem Defoe) and the sea witch, Mera (Amber Heard), Arthur must become the Aquaman to defeat Orm and bring peace to Atlantis and the Surface. 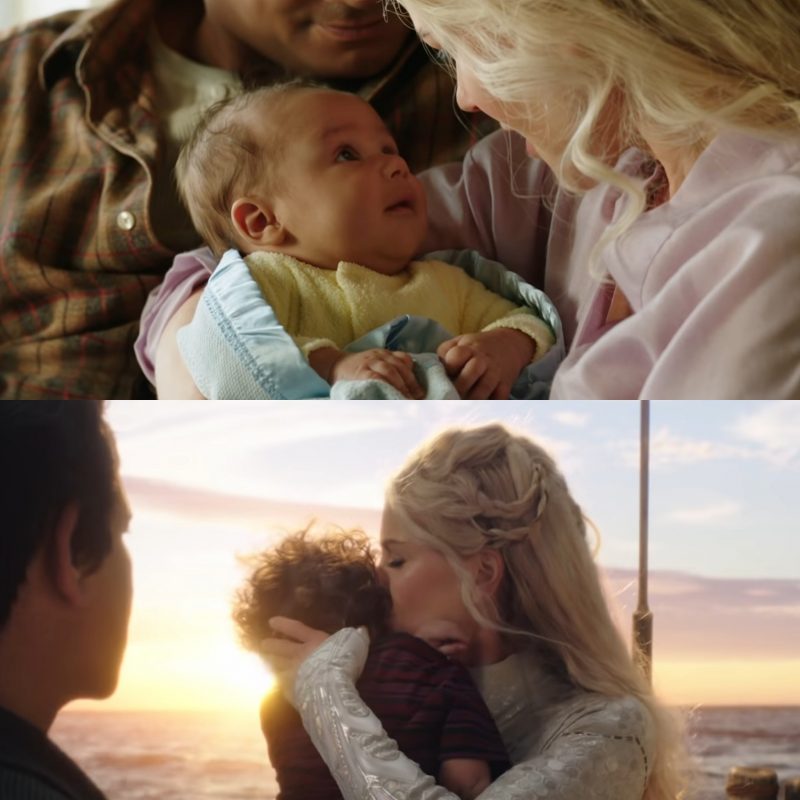 In a switch on how I usually present my reviews, I’m going to cover the negatives first and get to the positives later.
To start things off, let’s look at the villains. First, our main villain, Prince Orm. As superhero villains go, Orm is actually not that bad. He has a connection to the hero, and a personal reason to hate him thanks to their mother’s death—she was executed for her relationship with Arthur’s father and having Arthur. Such brotherly conflict is often rich with drama and works well enough between these two characters. You might be thinking: well that doesn’t sound like a negative to me. And you’d be right. The negative with Orm is that he tends to fall back on the whole “rule the world” cliché and the brotherly conflict isn’t used as fully is it is like with Thor and Loki. This weakness is made more acute by the fact that Orm’s reasons for wanting to attack the surface are rather general and vague, owing to a generic “polluting the oceans” message. Alternatively, he could have blamed the death of his mother on the Surface and used that as his motivation, which would have served his character far better given his attitude toward Arthur and his mother, Queen Atlanna.

Then we have Black Manta, widely regarded by fans as Aquaman’s greatest enemy, who is given a terrific motivation when Arthur chooses not to save his father (a pirate but still a human being) from drowning. But then he basically gets relegated to the position of “hired thug” and gets one quick action scene before getting taken out and promised a sequel by the producers (depending on the box office, of course). If you’re wondering again why this is a bad thing, there’s a reason you don’t have a main bad guy get beaten in his first confrontation with the hero, let alone the second time. It makes that bad guy seem less of a threat to the hero. If he’s already gotten his head handed to him before, why should we as the audience believe that the next time will turn out any differently? We know he won’t have any lasting victory anyway so there’s less of a doubt in our minds about the hero’s chances.

Besides this are a number of smaller things that bugged me. First, the musical score in the film is appropriately epic and sweeping for the majority of the runtime. Which is why it feels so jarring when they play a piece of pop music or rap like “Ocean to Ocean” by Pitbull. It just sounds out of place.
Second, while the drama is good for the most part, there are several moments that felt rushed in order to move the plot forward to fit the runtime (which is already a colossal two hours and twenty-three minutes). For instance, a moment between Arthur and his Mom gets cut extremely short to make way for exposition that leads to the next major plot point. I feel like other scenes that dragged on a little too long, like Manta tinkering with Atlantean tech, could have been trimmed to make more time for scenes like this. It’s not a huge thing, but emotional scenes should always be given time to breathe against scenes that are window dressing, or just there for the sake of being cool.
Lastly, a lot of the jokes that I think were intended to make the movie feel more “marvel-esque” were either mistimed or just fell flat to me, and there were several points in the movie where the CGI—however stylish it was intended to be—just looks a little too plastic and fake, particularly during some of the action sequences.

However, with all of that said, there are a lot of positives about this movie that I did like, starting with the visuals. I’ve made no secret in the past of my dislike for films that needlessly desaturate the color from the picture to make things feel more “dark and edgy”. Color is a wonderful thing when you consider how much richer and more interesting it can make an image that would otherwise seem rather mundane. Other movies from the DC franchise have had an issue with colors in the past to an almost absurd degree. Happily though, Aquaman does not have a problem with color. In fact, it’s one of the most colorful films I’ve seen in awhile particularly during the underwater scenes which take up a lot of the movie. The glowing phosphorescence and wide variety of shades involved helps to make for some truly beautiful images. It also helps the various undersea environments feel like a truly alien environment, which is another strength of this film. It takes advantage of the natural strangeness and mystery of the oceans to make Atlantis feel like an actual underwater city with history. It has different levels with shell based high-rises, a customs and import system, catacombs and ruins beneath it that all combine to feel like an actual underwater city.

This would probably be enough if Atlantis was all we got to see. The filmmakers however, went one step beyond and made several different undersea kingdoms with their own inhabitants and cultures. None of them are as multi-layered or detailed as Atlantis itself, but it shows how much thought the creators put into making this world and that’s something I can appreciate.

Besides this the story is delightfully simple and easy to follow, yet it also has a good familial conflict that makes it a bit more personal. I know this might seem boring and unoriginal to some but there’s a reason that siblings fighting over power, one to preserve, the other to destroy, is such a regularly used trope dating back to ancient times. Because it works and works well. We’ve all had fights with our family. Those fights are often very emotional and very personal and in spite of what Hollywood would like us to believe, our families are not something we can simply choose to ignore. They are a very personal thing for each of us no matter how we feel about them. That’s why stories about them are so powerful for us. Aquaman may not use it as well as some other movies I’ve seen but it’s still done well so I have to applaud the effort if not the result.

Lastly, we have the action which takes advantage of the underwater environment to create some of the more unique looking set pieces that I’ve seen in a movie in quite awhile. Since the characters are buoyant and don’t often walk on the sea floor the battles are very—for lack of a better word—fluid; constantly in motion. Now, if this was lazy motion where the speed was always the same, it would probably get boring. But the movie varies the speed of combat enough to not get stagnant and in the one on one fights Jason Momoa and Patrick Wilson are physical enough actors to be convincing. Overall, the battle sequences are a lot of fun to watch.

CONCLUSION: By this point most people know that the DC movies (or the DCEU as they’re known by fans have not had the best track record for making quality films. In fact, one of my personal least favorite films of all time was 2016’s Batman v Superman, which was a commercial success but a critical flop. I’ve always supported the idea that blockbusters shouldn’t be critically condemned for being blockbusters but that they should also try to be more than just cash grabs for the studios. Whether that’s being a deeper more critically acceptable film, or one that is just plain fun to watch, it should at least try. Aquaman is a film that tries. It may not always succeed when it tries but at least it tries and tries hard. That is one of the best compliments I can give to a film like this, especially given my history with DC movies of the past. I can’t say whether this is the beginning of a new era of DC films with higher quality. But I know that this was a film I was prepared not to like, yet I enjoyed it anyway and look forward to seeing it again sometime.

What did you think of the review? Did you like this film? What parts of it stuck out to you? Let me know all about it on the Flickmuncher Facebook page or in the comments below. Thanks and as always, May the Flick be with You!